A version of this commentary was published in May 24 editions of Modern Healthcare. New anecdotal content has been added. Please see the following link to view the original content – http://www.modernhealthcare.com/article/20160524/NEWS/160529960/commentary-medicares-big-data-tools-to-fight-and-prevent-fraud-yield

Over the past five years, the CMS has successfully implemented a Fraud Prevention System using “big data” and predictive analytics approaches to fight fraud, waste and abuse in the Medicare fee-for-service program. Taking “big data” mainstream has given the CMS the ability to better connect with public and private predictive analytics experts and data scientists, as well as collaborate more closely with law enforcement. The Fraud Prevention System’s “big data” effort has had a profound impact on fraudulent providers and illegitimate payments by allowing us to quickly identify issues and take action. For example, the FPS identified a home health agency in Florida that billed for services that were never rendered. Due to the FPS, CMS placed the home health agency on prepayment review and payment suspension, referred the agency to law enforcement, and ultimately revoked the agency’s Medicare enrollment. In Texas, FPS identified an ambulance company submitting claims for non-covered services and services that were not rendered. Medicare revoked the ambulance company’s enrollment. Likewise, FPS identified that an Arizona, medical clinic had questionable billing practices, such as billing excessive units of services per beneficiary per visit. Upon review of medical records, it was discovered that physicians had been delivering repeated and unnecessary neuropathy treatments to beneficiaries. The medical clinic was revoked in 2015 from Medicare enrollment.

Through cases like these, the CMS is seeing impressive results nationwide. This predictive analytics technology contributed to more than $1 billion in savings in 2014 and 2015. The Fraud Prevention System, or FPS, is innovative in that we have moved beyond the reactive “pay and chase” approach toward a more effective, proactive strategy that aims to prevent these illegitimate payments in the first place. Since its June 2011 inception, the FPS has identified significant savings by running sophisticated analytics on 4.5 million Medicare claims on a daily basis, prior to payment. Year after year, the FPS has continued to improve its ability to identify or prevent fraud. Since the beginning of the program, over $1.5 billion in inappropriate payments has been identified by the system through new leads or contributions to existing investigations. Also, in 2015, the CMS marked its first-ever national return-on-investment of $11.60 for every dollar the federal government spends on this program integrity system. As we moved toward preventing inappropriate payments, we also successfully developed ways to measure costs avoided due to removing certain providers from the Medicare program and tracking return on investment. These methodologies to calculate cost avoidance have achieved certification by HHS’ Office of Inspector General, the first such certification in the history of federal healthcare programs. The CMS is now working to develop next-generation predictive analytics with a new system design that even further improves the usability and efficiency of the FPS. Using it and other advanced tools, we are committed to addressing fraud, waste and abuse in the Medicare program to better protect beneficiaries and taxpayers. 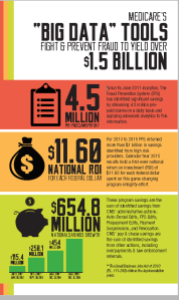 Tired of being under-represented? You should be. You are being largely ignored, yet you are one of the largest and strongest voting bases in the country. We need retired writers from all states to report on the stories that gray voters need to know about. No one is going to represent us, so let's represent ourselves. Political affiliations make no difference. We come in all persuasions. Get off your butt and lets get to work. Email me at sandcrapper@gmail.com.